You are here: Home / Archives for Christ is Risen 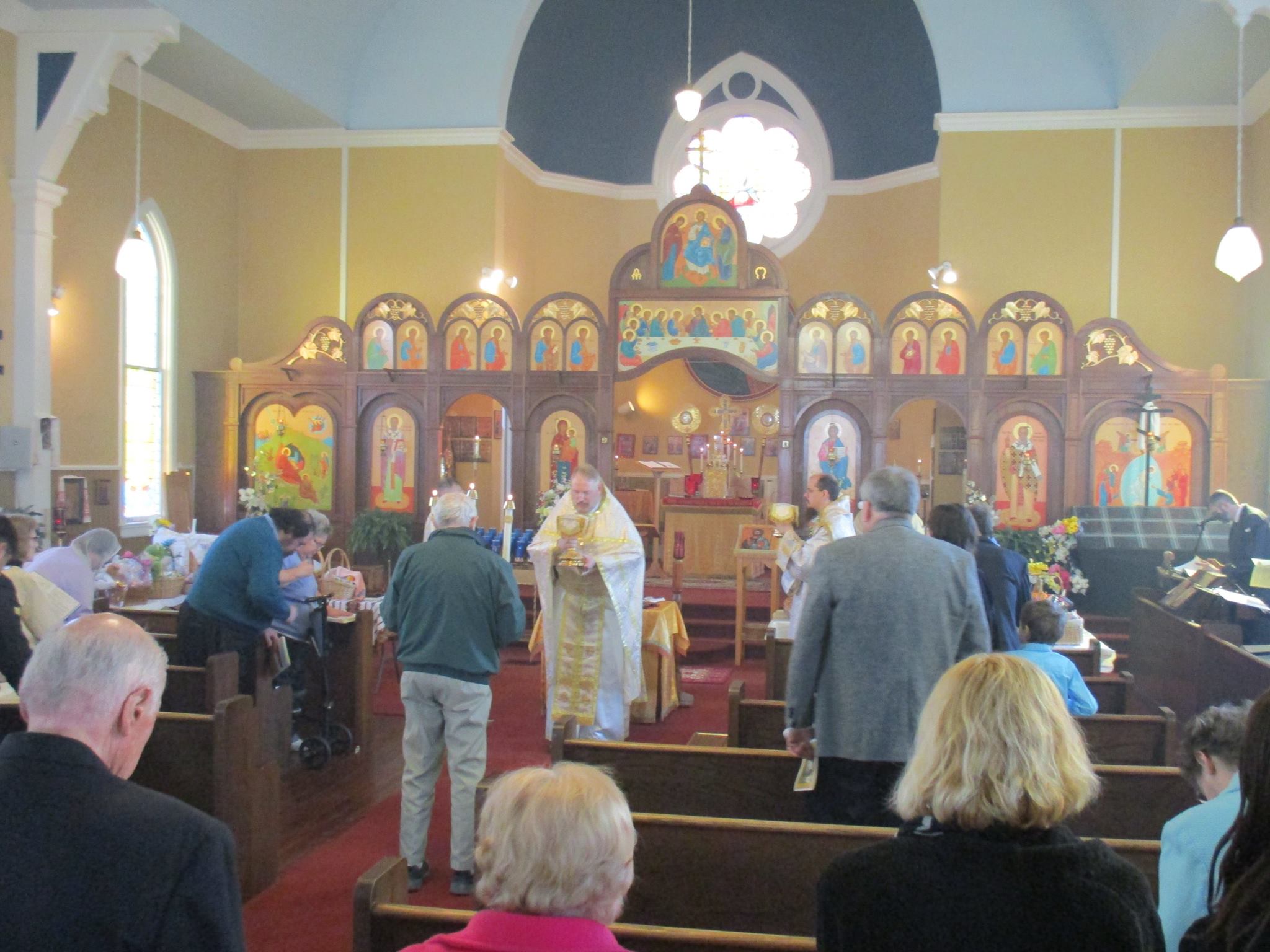 St. Athanasius the Great Byzantine Catholic parish in Indianapolis IN extend our sincerest wishes for a joyous and a blessed Paschal season, an Easter season which brings nothing but an abundance of all good things from the hand of our merciful and generous God to you and to all your loved ones.

The Paschal [Easter] Greeting in various languages!
English: Christ is risen! / Indeed He is risen!
Arabic: Al-Maseeh qam! / Háqqan qam!
Greek: Christós anésti! / Alithós anésti!
Slavonic: Christós voskrése! / Vo-ístinu voskrése!
Spanish: Christo ha Resucitado! / Verdademente ha Resucitado!
Romanian: Christós a inviáht! / Adevarát a inviáht!
Hungarian: Felta’madt Krisztus! Valo’ban felta’madt!
Quartet practicing for Pascha – video
Father Bryan proclaiming “Christ is Risen” during the singing of the Paschal Canon – video
Are there any who are devout lovers of God?
Let them enjoy this beautiful bright festival!
Are there any who are grateful servants?
Let them rejoice and enter into the joy of their Lord!
Are there any weary with fasting?
Let them now receive their wages!
If any have toiled from the first hour,
let them receive their due reward;
If any have come after the third hour,
let him with gratitude join in the Feast!
And he that arrived after the sixth hour,
let him not doubt; for he too shall sustain no loss.
And if any delayed until the ninth hour,
let him not hesitate; but let him come too.
And he who arrived only at the eleventh hour,
let him not be afraid by reason of his delay.
For the Lord is gracious and receives the last even as the first.
He gives rest to him that comes at the eleventh hour,
as well as to him that toiled from the first.
To this one He gives, and upon another He bestows.
He accepts the works as He greets the endeavor.
The deed He honors and the intention He commends.
Let us all enter into the joy of the Lord!
First and last alike receive your reward;
rich and poor, rejoice together!
Sober and slothful, celebrate the day!
You that have kept the fast, and you that have not,
rejoice today for the Table is richly laden!
Feast royally on it, the calf is a fatted one.
Let no one go away hungry. Partake, all, of the cup of faith.
Enjoy all the riches of His goodness!
Let no one grieve at his poverty,
for the universal kingdom has been revealed.
Let no one mourn that he has fallen again and again;
for forgiveness has risen from the grave.
Let no one fear death, for the Death of our Savior has set us free.
He has destroyed it by enduring it.
He destroyed Hell when He descended into it.
He put it into an uproar even as it tasted of His flesh.
Isaiah foretold this when he said,
“You, O Hell, have been troubled by encountering Him below.”
Hell was in an uproar because it was done away with.
It was in an uproar because it is mocked.
It was in an uproar, for it is destroyed.
It is in an uproar, for it is annihilated.
It is in an uproar, for it is now made captive.
Hell took a body, and discovered God.
It took earth, and encountered Heaven.
It took what it saw, and was overcome by what it did not see.
O death, where is thy sting?
O Hell, where is thy victory?
Christ is Risen, and you, o death, are annihilated!
Christ is Risen, and the evil ones are cast down!
Christ is Risen, and the angels rejoice!
Christ is Risen, and life is liberated!
Christ is Risen, and the tomb is emptied of its dead;
for Christ having risen from the dead,
is become the first-fruits of those who have fallen asleep.
To Him be Glory and Power forever and ever. Amen!
The Easter sermon of John Chrysostom (circa 400 AD)