You are here: Home / Parish History
Parish History of St. Athanasius the Great
It was the sixth Sunday after Easter in 1980. Liturgically, this day is know as the Sunday of the Holy Fathers and is dedicated to the Nicene Council. The homily was an inspiring story of the Council and the tenacity of St. Athanasius. A small congregation had been meeting for five weeks and it appeared that the effort would continue. In the following weeks when the question of choosing a name for the mission church arose, St. Athanasius became the inspiration. Just as he steadfastly held to the truth in the face of tremendous pressure, the congregation felt that the Byzantine traditions were worth preserving despite the difficulties that would be faced.
There is no greater human model for perseverance in what one believes than St. Athanasius, and thus he became the patron of the mission effort. In the same way St. Athanasius was able to maintain truth in a vast sea of turmoil, the congregation hopes to follow his example and be faithful to the Byzantine Rite in a society that promotes expediency. Perhaps in some small way we can be worthy of the remembrance of the cries of his supporters of “Athanasius against the world” as we continue our efforts.
The first liturgy in Indianapolis was celebrated by Fr. Patrick Hoffman on St. Thomas Sunday, April 27, 1980 at 7 P.M. in the Roman Catholic Cathedral of Sts. Peter and Paul. Fr. Hoffman at the time was stationed in Chicago and traveled to Indianapolis by bus. The following week, the liturgy was celebrated at Holy Angels Roman Catholic Church.
In June of 1980, Sister Julianne at St. Vincent’s Hospital graciously opened the chapel and a conference room to the parishioners. Services continued each Sunday at 7:00 P.M. At this time, pastoral responsibilities were shifted to the new pastor at St. Barbara’s Church in Dayton, Ohio, Fr. Basil Hutsko. In order to better accommodate his schedule in Dayton, Fr. Hutsko changed the liturgy to the first and third Saturdays of each month at 5 p.m.
Following an administrative change at St. Vincent’s hospital in September of 1981, the parish was no longer welcome at the hospital chapel. Services were moved to the Church of the Holy Spirit where Fr. William Munshower enthusiastically welcomed the mission effort. To avoid conflicts, the liturgy schedule was changed to the first and third Sundays of each month at 3 p.m. 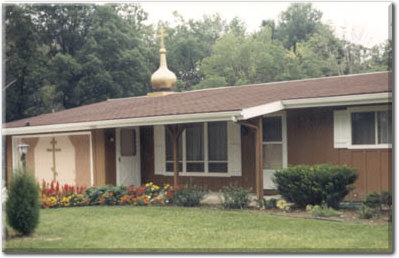 By January of 1985, the parish had saved enough money for a deposit on a house and lot on the East side of Indianapolis. Before the real estate negotiations were completed, Bishop Mihalik died. Monsignor Andrew Vaida, who was in charge of such affairs until a new bishop could be named, provided the guidance and inspiration to finish the process under such difficult circumstances. The purchase was finalized early in April of 1985. The house was altered to accommodate a chapel in time for Resurrection Matins and Divine Liturgy on Easter Sunday, April 20.

Bishop Andrew Pataki was installed in the Diocese of Parma in August of 1985 and with his approval, Fr. Hutsko began to celebrate the liturgy each Saturday at 5 p.m., beginning in May of 1986. Four months later, Bishop Pataki came to Indianapolis and dedicated the church.
Father John Trompak succeeded Fr. Hutsko as pastor in August of 1987 and continued the weekly Saturday liturgies. Under Fr. Trompak, the chapel was renovated as well as a religious education program that led to the initial first communion class in May of 1988. Father John served until August of 1990.
In September of 1990, Father Christopher Burke became our pastor. He also continued with the Saturday evening liturgies and served as the pastor for Saint Barbara’s in Dayton, Ohio as well. Father Burke left in January of 1991 and was replaced by Fr. Edward Wojciechowski.
Fr. Wojciechowski also continued with the Saturday evening liturgies until he was assigned as our first resident pastor in January of 1992. The Saturday evening Divine Liturgy were then moved to Sunday morning at 10:00 a.m. and Fr. Ed then celebrated all the weekday liturgies along with Feast Day liturgies being celebrated on the Feast Day. Father Wojciechowski served until July of 1993 at which time the Bishop transferred him to St. John the Baptist Byzantine Catholic Church in Minneapolis, Minnesota. During the time Fr. Wojciechowski was here, we were beginning to outgrow our Chapel, and different ideas on remodeling, building or buying something larger were discussed.
Fr. Robert McElaney, O.S.B., a Benedictine Monk assigned to St. Maur Monastery in Indianapolis, and a bi-ritual priest was assigned as our pastor in July of 1993. With Fr. Robert’s knowledge of the Indianapolis Archdiocese, and with the cooperation of both Bishop Beuchlein of the Archdiocese of Indianapolis our Bishop Andrew Pataki of the Eparchy of Parma, we were able to purchase the former Roman Rite Assumption Church on the West side of Indianapolis.
Throughout history, all good things come from “the East,” Jesus Christ was born and shall come again from “the East,” : the star in “the East,” the Wise men came from “the East,” Christianity has its roots in “the East,” the priest faces “the East,” the sun rises in “the East,” and of course the Byzantine Catholic Church came from “the East.” So, following in this great and glorious tradition, St. Athanasius the Great Byzantine Catholic Church also came from “the East,” — East 25th street that is — to West Indianapolis.
After Divine Liturgy on Wednesday evening April 5, 1995, several parishioners with willing hands and grateful hearts, pitched in to make the move possible. We celebrated our first Divine Liturgy in our new facilities on Palm Sunday, April 9, 1995. A lot of work has been done, but a lot remains to be accomplished. We are blessed with a church that has a 100 year history, a rectory and St. Mary’s Parish Hall.
Fr. McElaney continued to serve as our pastor until his untimely death in October of 1997. After his death, we were greatly blessed to have several bi-ritual and Eastern Catholic priests volunteer to celebrate the Divine Liturgy on a rotating schedule.
In May of 1998, Rev. Fr. John Kapitan, O.F.M. was assigned by Bishop Basil Schott of the Eparchy of Parma to be our Administrator. Fr. John has overseen some major repairs to the church building and the rectory, a new kitchen in the parish hall, paving of the parking lot and several other repairs and remodeling. Slowly, when funds become available, there will be a new dome, and a new iconostas.
In September of 2004, Rev. Fr. Sid Sidor was assigned by Bishop John of the Eparchy of Parma to be our Administrator.